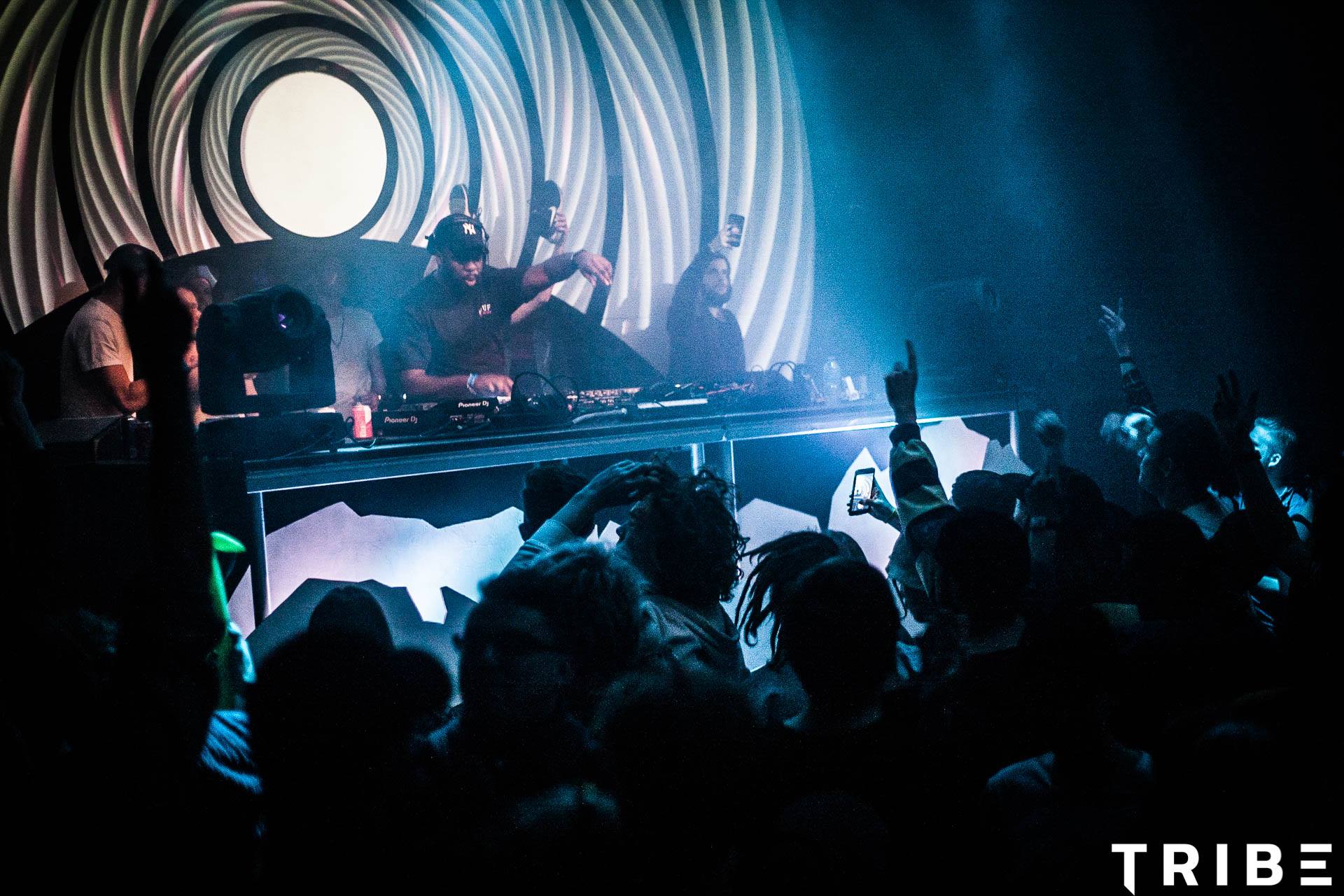 When De Boulevard in Breda, the home base of the Symbiose parties, got sold about three years ago, the drum and bass loving community in Breda had to face an uncomfortable void. Another chapter, for a scene with a relatively small, but tight following, came to an end. Luckily, things didn’t stay quiet for long. A revival ensued, albeit through different means.

The torchbearers at Symbiose helped to keep the flame alive by combining forces with TRIBE at the MEZZ. It’s fair to say, they’ve hit the ground running and carried on the tradition in an even bigger way. Fast forward to the present: TRIBE will celebrate their third birthday on 23rd of November at the new and improved MEZZ. Let’s take a look at their journey so far. Better still? Perhaps the best is yet to come… so what does the future hold?

Read below what Sjonnie Kreeft (creative director), Maarten van Meerbeek (programming) and Ravenna Sanders (marketing) had to say about their most cherished memories through TRIBE and shared a vision for 2020 and beyond!

You already were involved at MEZZ, Ravenna. Can you tell us how the party started?
Ravenna: Yes, I worked as a volunteer there; doing shifts as a barmaid or helping out at the cloakroom. When Symbiose ended, it became rather silent in Breda. Leaving the city seemed the only solution when you wanted to party. Such a shame, I thought. It’s evident now though that the scene is very much alive here.

Still being here after three years proves that, so congratulations. How are things currently?
Maarten: Good, drum and bass is more alive in Breda than ever before, and there’s a really strong foundation in Breda. The younger generation is very involved with the music, there really is a core group in Breda.

How does it feel when looking back at three years of TRIBE?
Sjonnie: Exciting, especially because of the upcoming edition.

Maarten: In terms of line-up, decoration and everything in between, this is the biggest edition, so we’re hoping it will pay off. It’s looking promising thus far.

TRIBE more or less is your brainchild, Ravenna (together with Thiago). How did it feel having to share it with the remaining crew of Symbiose?
Ravenna: Initially the collaboration felt a bit stiff, but that’s partly because of the way we were brought together. Something like: ‘Hey, from now on you will work together’. It’s not like we were made to (work together), but we didn’t know each other at the start.

Sjonnie: MEZZ contacted us and asked if we wanted to work on this, but we hadn’t even met yet.

Ravenna: At the start, it was hard to get on the same page, but I’m really happy that we’ve found the right way to do this. It has become a very good collaboration.

With what slogan would you describe TRIBE?
Maarten: The name sums it up: unity, friendship – a place to come together and have a good time with likeminded lovers of the same music.

Ravenna: Same for me. In terms of the night itself, but also while creating this party. We all share this common goal: lifting the experience of the visitors, while raising our own bar(s) in the process – it really is about the feeling of togetherness.

Sjonnie: This exactly is what it’s all about

What can you tell us about the line-up for 23rd of November?
Maarten: I had the chance to be in Bristol for seven months this year and I really got inspired by the sound that’s represented there. That’s why we have DLR as our headliner, who’s from Bristol. He has a very distinct, techy sound.

Really looking forward to Amoss as well, he really has his own style. DJ Limited will drop by to satisfy the jump-up heads, he’s also known for a very original take on the genre. And there’s also DJ Hybrid, who neatly combines jump-up and jungle.

Two upcoming Dutch artists LMB and Waeys will do a B2B. Both of them are making waves recently, so yeah. I will also play as well (as Creek). It’s a very diverse line-up that covers different subgenres within drum and bass.

Anything special to add in terms of celebrating this third anniversary?
Maarten: We’re lucky because MEZZ has been renovated, so there’s a whole new part added. They’ve added a whole pop café, it’s quite bigger than before.

Sjonnie: The café is a big addition, but there are also improvements in terms of logistics and sound system and lighting.

Ravenna: There will be new visuals in the foyer which people will surely like.

Maarten: The experience will become more immersive, we want to give people the idea that they really enter a different place when they enter the venue.

What about the décor on the stage?
Sjonnie: We will surely upgrade in this sense. A shout-out to Thiago! We will aim to introduce more moving pieces of décor with the goal to make the experience more dynamic and immersive. The visuals on these pieces will also move and around this there will be plenty of room for Gijs, our visual artist, to work with.

When looking at personal development, what did these three years give you?
Ravenna: A big learning experience. Initially, we just started and figured we got to try and see how it goes. There wasn’t really a vision back then. Still doing this after three years, is really cool. I’m employed in online marketing, so all the knowledge is transferable. You expand your network and look at other parties in a different way.

Maarten: I (have) had the chance to meet a lot of new people and make new friends. When I go to other parties, people know that I’m from TRIBE and it’s really cool. I want to get to a point where I’m able to keep doing this and so far it’s going pretty well.

Sjonnie: The successes through TRIBE have really motivated me to be more ambitious to the point that I’ve started a company, which represents the idea of TRIBE and will embody and represent similar concepts. This has become the goal and a lot of energy goes into this besides TRIBE. We’re aiming to start a professional company.

A few editions ago, TRIBE successfully participated in a pilot from the local municipality, which basically shifted the closing time from 4 AM to 5.45 AM. How important is something like this for your party?
Maarten: Very important. Those who come, don’t have to wait two or three hours until the first train. They get to party longer and can get home sooner afterwards. Party people who don’t live in Breda are more inclined to visit.

Ravenna: There’s a substantial group present until the end of the night, so the party stays busy and that’s really nice to see.

What’s your most cherished memory from TRIBE?
Maarten: The throwing of shoes… this is a thing at TRIBE. During the edition with GLXY, a shoe was thrown at the crowd. Someone threw the shoe back and it all has been captured on video. Because of this video, it remains a very memorable moment.

Has this become a thing?
Maarten: Yeah, the funny thing is: the crew from Breda brings a new meme to each edition. At one time, people were standing at the front with spoons during the whole night. Every time it’s something different, I really like this.

Sjonnie: For me, it’s the edition when Philth played. It was really cool to meet this wonderful guy. The fact that he stayed with us the whole night, partied, and even went to the afterparty at Camillo’s house (one of the other core crewmembers, also involved with the programming, promo etc.), while he had to catch a plane in the early morning… it was a really awesome night!

Ravenna: I remember the very first edition. We thought about what ravers really like – something people really want at a party: free ice-cream. So we figured to personally distribute these. I stepped down to the plateau (dancefloor) and saw people turning around… after about five seconds my whole stack was gone. Next batch: same thing! People were really happy.

Looking ahead again: what is the vision for the future?
Sjonnie: It is our shared vision to evolve into something like a festival. A big standalone production which attracts and inspires a lot of people through our ideas. This is the ultimate goal for TRIBE in the future.

Maarten: …two editions at two different locations. Beyond that, there will be another twelve…